World records are an impressive feat, regardless of what field, profession, hobby, or anything really, that you may be in or a part of.

More often than not, they are examples of people living/working well out of the ordinary and mundane, and stepping into an almost legendary status.

The same goes for many drugs too. From the biggest producers to the most consumed (brave or foolhardy, it’s hard to tell sometimes), to the oldest or most obscure pieces of information about them.

There’s plenty of ground to cover, and plenty of world records to stand in awe of!

That is why, in this guide today, we are going to show you some of the most insane cannabis world records that we currently know of. Some of them are so strange, you’ll be wondering whether you’re on the good stuff yourself!

We’re starting this guide with a pretty big one. As drug policies change across the world, various countries, both legally and illegally.

Many countries have become known for their reputations and how much cannabis they are producing. But who produces the most?

Well, that title used to belong to Afghanistan. At least, back on the 31st of March 2010. Now, a few countries have supplanted it in terms of just pure output numbers.

Mexico has now become an overall bigger producer of the plant, with the government decriminalizing small quantities of the drug being on your person back in 2009.

Combined with a relatively lax public attitude to it (as well as one of the biggest markets just north of them), and even regulated use of it in research, medicine and recreational use of cannabis as of 2021, meaning that production is only likely to further increase in the future.

However, for now, at least, the biggest producer of cannabis is in Morocco, where over 57,000 hectares of land are dedicated to growing the plant, primarily for use in Hashish.

However, with the country legislating for additional research into its industrial and medicinal uses going forward in 2021, there’s a good chance that this number will increase even more in time!

However, while many countries are changing their approaches to drug trafficking and cultivation, there are still many places where owning or growing cannabis is a serious criminal offense.

Add to that the fact that pretty much every country, whether it is legal or illegal to grow, tries and monitor the movement of these substances within and between countries, and there are going to be seizures of illegal amounts of weed.

The biggest seizure in recorded history took place in 2008, in the former record holder for cannabis production, Afghanistan, where the largest stash of cannabis was ever recorded (at least in terms of weight) was discovered in the country’s biggest drug-busting operation.

The cannabis stash, which was estimated at being valued at around 263 million euros, weighed around 522,496 pounds (or 237 tons) which is more than 33 African elephants!

The stash was so large, it couldn’t even be burned to destroy it! It took a Royal Air Force bombing to destroy that amount of cannabis! 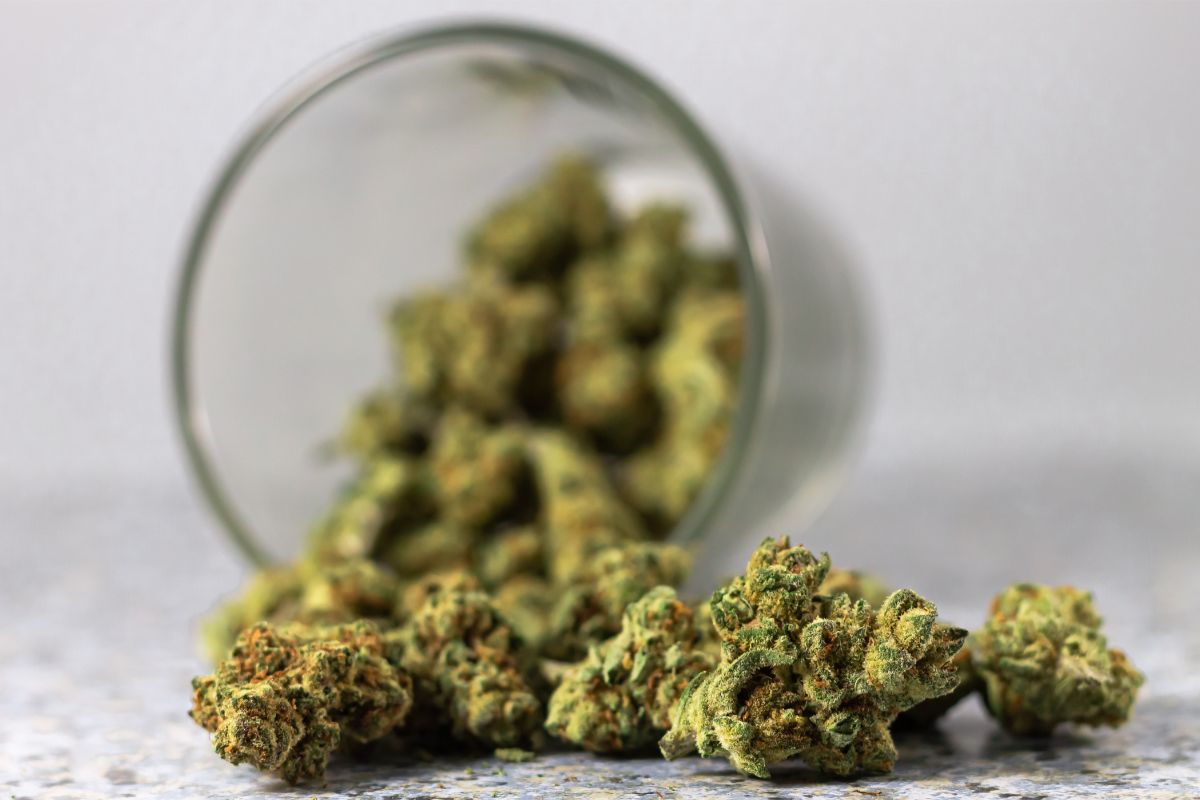 Moving from the more serious geopolitical side of these world records, let’s talk about a big brownie for a change!

Weed brownies are one of the most popular methods of consuming cannabis, outside of smoking the recreational drug, with the high also having a few different effects.

Thanks to the different methods of ingesting and release of THC, the chemical that gives cannabis is psychoactive properties, into the body.

The biggest of these weed brownies was created in 2021, by the folks over at MariMed in Massachusetts.

The brownie itself was a behemoth block of baked goodies that clocked in at 804.6 pounds in weight (or 356 kilos).

Which makes this over three times as heavy as the record holder for the largest conventional brownie, which only weighed a comparatively measly 100 kilos by comparison!

And that’s to say nothing of the other frankly ridiculous numbers that this weed brownie can boast. The brownie contained 2,000 mg of THC.

Which the media that reported on the subject estimated would be the equivalent of 66 normal joints of cannabis!

(Normal being the operative word here. As we’ll see in this list, some people take normal less average less as a measurement to roll them to, and more as a challenge to beat!)

In any case, it’s probably the most appetizing record on this list, that’s for sure!

So, what about cannabis joints and blunts themselves? What is the biggest blunt in the world that someone had ever rolled?

Well, that honor would probably go to the Bazooka blunt, rolled by the smoking artist Weavers in 2017!

The blunt in question gets its both hilarious and awesome name from the fact that the blunt had to be held like a bazooka, over the shoulder of the person who was carrying it, with the end looking an awful lot like some kind of rocket launcher.

This blunt contained a jaw-dropping 5 pounds worth of ground-down cannabis in it, which took Weavers a whole day just to grind down into a form that could be used!

The blunt itself was rolled and made as part of the 10th-anniversary celebration of the Los Angeles Herbal Remedy celebration, and took 4 hours to be smoked once it was lit.

If you haven’t had enough of cannabis joints and blunts that didn’t seem to know when to quit, wait til you hear about the world’s longest joint that was made back in 2017!

Taking us back to the state of Massachusetts, 4 years before the weed brownie of legends was baked, a couple of cannabis enthusiasts (and by enthusiasts, we mean Greentown Beantown cannabis advocacy group and business) decided that.

As part of the Harvest cup in Massachusetts, as well as a celebration of the legalization of cannabis in the state, that they would make the longest joint in the world as their contribution to the occasion.

The joint itself measured a little over 30 meters, and contained around 1000 grams of cannabis bud, which we’d normally find hard to believe if we hadn’t just been talking about a Bazooka blunt in the last section!

That’s a lot of cannabis for a single world record (and a lot of money), for sure. But what price would you put on glory like this?

All we know is that between this, the Bazooka blunt from before, and the boulder called a weed brownie, that’s one hell of a party!

So, we’ve already established that, in terms of production, Morocco is THE world leader.

However, when it comes to where you can find the single biggest weed farm, we have to turn to our northern friends in British Columbia, Canada.

It’s here that we find the largest cannabis farm in the entire world, with over 300,000 plants being grown on this farm alone!

The farm is owned by Canopy Growth, who own and maintain several cannabis farms across Canada, and needs 180 people to properly maintain this behemoth of a cannabis garden.

Most Weed Smoked By A Single Individual

We’ve probably all met someone who seems to smoke an obscene amount of cannabis. In many cases, it is frankly an impressive feat! But it also begs the question, who has smoked the most weed out there?

Well, unless the tall tales from your best buddy from two blocks down are to be believed, the title of ‘person who has been recorded as smoking the most weed’ fall’s on Irvin Rosenfeld, a cannabis advocate and all-around legend in the world of cannabis smokers.

While the program stopped receiving applicants in 1992, Irvin Rosenfeld continued to receive free joints from the US government every day since he was approved.

In the Guinness Book of World Records in 2014, he was recorded as having smoked 115,000 joints in total. Accounting for the 8 years since then, it is estimated that the number now sits at over 120,450 at this point.

Now, is it possible that some other mad lad has managed to smoke more than Rosenfeld?

Oh, most definitely. But unless you have the state-sponsored paperwork to back it up, no one else in the world in the world can prove that they have smoked more than Irvin has!

Whilst some people are uncomfortable with the more widespread use of cannabis today, seeing it as an issue of modern times.

There’s a lot of evidence to prove that smoking this pant has been around almost as far back as the concept of human society has existed!

Archaeologists have uncovered a tomb containing human remains and a significant amount of cannabis in West Asia on a mountain plateau in the Pamir mountain range.

The tomb is believed to have been for shamanic rituals, and dates back to 2,700 years ago, meaning that whoever this person was a contemporary of the Ancient Greeks and Persians.

It’s believed that the higher altitude that the tomb was found in, coupled with a stronger-than-expected strain, would’ve increased the psychoactive effects substantially.

Incredibly enough, the cannabis itself is still smokable! We wouldn’t recommend it, both for anthropological and health reasons. This stuff would be coarse on your throat!

So, which of these facts did you already know?