Many times when crossing a yard or garden, you must have noticed corn plants that look like corn stalks but actually, there is no corn in them. Do you know why? Because these are not the real corn stalks but look-alike plants with a similar resemblance. There are notable corn-like species available in the market that you can easily grow in your yard to enhance its beauty. Today, we will brief you about five plants that look like corn stalks but still are not. But before that, let’s have a basic understanding of the real corn plants and what makes them different from their look-alike species.

Everything you need to know about Indian Corn – Types & Physical Appearance

Known as Zea Mays or Indian Corn, Corn is a tall annual grass with edible grain. It is a cereal plant that belongs to the Poaceae family. This crop is also widely used as livestock feed, raw material for industry and biofuel. You can identify the Indian corn plant through its unique physical attributes like:

Based on kernel texture, there are various types of Indian corn, like Popcorn, Sweet Corn, Flour Corn, etc., that are used for different purposes. Here are the different kinds of Indian Corn and how to differentiate them:

1) Sweet Corn: The plant sugar is converted to starch in other corn types, except sweet corn. It is sold as a fresh, canned or frozen vegetable. Its translucent wrinkled seeds characterize it.

2) Pop Corn: Popcorn can be characterized by its stiff and small kernel, devoid of starch. The heat causes the kernel to expand and explode, exposing the large grains that grow as pop corn.

4) Dent Corn: The kernel of Dent corn is characterized by a depression in its clown due to the unequal drying of hard and soft starch. This corn type is usually used for livestock feed and food manufacturing.

5) Flint Corn: This corn type has no dent in its kernel. It contains very little starch and is generally used for decoration purposes.

Now come to the main part of the topic- the look-alike plants that give you a false impression of corn stalks but actually are not. Let’s learn everything essential about these plants. 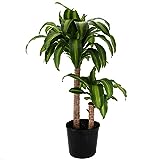 Dracaena Fragrans Massangeana is the famous house plant that resembles Corn stalks but doesn’t produce any actual stalks. It doesn’t have tassels or ears like the actual corn plant. But its long, thin and broad leaves resemble like the leaves of corn stalks. At the centre of the leaves, there is a beautiful yellow-golden stripe that enhances the overall look of this plant. Also, its thick stem gives resemble like a tree branch.

It is an indoor corn plant that can be grown easily without direct sunlight. All it requires to grow appropriately is regular watering. It can withstand an internal temperature between 15-24 degrees Celsius. This plant requires moderate household humidity for its proper growth; an excess dry environment can damage it.

The plant cannot withstand the direct sunlight as it scorches the leaves. So you have to place it in a spot that gets a moderate amount of indirect sunlight. If the plant receives low light, it produces leaves without the golden-yellow stripe.

When cultivated, the plants slowly grow to a mature height of 4-6 feet. In the case of wild species, the height can reach between 15-50 feet. The leaves grow with an average length of 2 feet and 3-4 inches wide.

This plant produces flowers in pinnacles that can have a length of up to 3 feet. These flowers later bloom into red berries. Once the plant stops blooming, the new head of leaf sprouts from the part where the flower pinnacle was.

Commonly known as Jowar (in India) or Great Millet, Sorghum is a popular self-pollinating outdoor plant that resembles a sweet corn plant from a distance in the yard but actually doesn’t produce corn. It is a versatile and ancient cereal grain crop that belongs to the Poaceae grass family and is known for its high-protein content & other nutritional values.

It can be grown as a sweet crop, grain or forage depending on the purpose. Its grains resemble corn grains but are shorter and more colourful than them. The head of this plant grows at the top and can vary in colour like yellow, white, red or bronze.

This crop is widely cultivated in the southern US and packed with lots of nutritional content like Vitamin B6, Protein, Niacin, Iron, Magnesium and Phosphorus. It has more starch content than the Indian corn and consists of nearly 75% complex carbohydrates to keep you energetic the whole day.

Sorghum grass can vigorously grow to the maximum height of 15 feet (4.6 metres) in proper environmental conditions. Its moderate height reaches between 2 to 8 feet. Its flowers are produced in panicles that can be both loose and dense. Each cluster of flower or panicle consists of about 800-3000 kernels that can vary in size, shape and colour, but usually are smaller than wheat grains.

This crop thrives in warm weather or summer season as it requires a temperature over 90 degrees Celsius to grow appropriately. The ideal soil for this crop is sandy soil. However, it can handle both drought and flood better than the corn plant.

The ideal season to grow this crop is late May and early June. For its proper growth, regularly give nitrogen fertilizer for initial six weeks. Also, keep the area free from plant weed for its healthy growth.

Golden German Millet is a popular warm-season annual crop with golden seeds resembling corn grains. It has broad leaves and a fine stem, just like a corn plant but doesn’t produce any corn stalks. It is usually planted in hot summer conditions as single-cut hay millet and livestock feed.

Golden German Millet is relative to Foxtail millet but has higher yield quality than that. This crop is shallow-rooted and has great resistance to diseases and lodging. Although the crop has a high maturation period, it yields higher than any other millet variety. Unlike the corn plant, it has high protein content and less starch.

German Golden millet requires 85-90 days to bloom after seedling. The seedling should be done early in the morning in hot weather, and it should be placed one-half to three-quarters of an inch deep. Due to its high-water efficiency, the crop grows well in light soil and can efficiently handle drought. It requires a firm seedbed for proper germination.

The ideal season to cultivate this crop is early June. It is crucial to eliminate the grassy weed prior to planting Golden German Millet. Also, the crop requires nitrogen and phosphate fertilizer for satisfactory yield. The ideal temperature for the growth of this crop is between 32 to 35 degrees celsius.

When Golden German Millet grows, it develops sharp bristles that can hurt cattle. When the crop gets over matured, it becomes a diuretic. However, in the case of improper maturation, it causes laxative effects and thus cannot be used as livestock feed.

Apart from indoor and outdoor plants, there are some weeds that look like corn stalks but actually can be harmful to your yard. Here are some popular look-alike weeds to corn stalks: 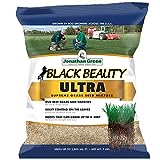 Scientifically known as Sorghum halepense, Johnson Grass is a widespread corn-like perennial weed with 6-7 feet tall stalks resembling corn stalks. It belongs to the Poaceae grass family and is natively found in Asia and North Africa. It grows rapidly and can be used to forage and prevent soil erosion. It has stout, erect stems with alternate & flat leaf blades. The leaves are purplish in colour with a whitish midrib.

The golden-colour seeds are produced by purplish pyramid-shaped flowerheads having a large-hairy texture. These seeds are viable for up to 30 months, and a single plant can produce around 80,000 seeds per season.

This weed usually grows in vineyards, vegetable gardens, cotton fields, and orchards. It produces flowers between May and October. When the plant is young, the seedlings appear as small golden corn. But later, the grass develops as a weed which immediately should be dislodged with either weed eater or hand.

This weed works as a pest in the garden and can somehow hamper the growth of the other plants. That is why in every USDA zone, it is restricted to grow. 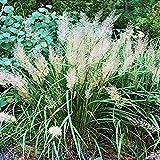 Also known as Arundo donax, Elephant Grass or Giant Cane, Giant Reed is an invasive perennial grass that belongs to the Poaceae family. It is found in riparian and wetland areas. The plant is usually found in North America, the Caribbean and some parts of the Mediterranean. This plant has stems resembling corn stalks and can grow up to a height of 20 feet.

Also, its leaves are long and lance-shaped, just like corn plants but don’t produce any corn grains. Its hollow stems are generally used to make flutes, organ pipes and reeds for woodwind instruments. Its leaves are straplike and used to make mats in some regions. Apart from it, the plant is also used for decoration purposes and soil erosion control.

The plant blooms dense flowers upon maturation at the tops of the culms. Usually, this plant has no fruits on it. The plant thrives in warm areas, especially where humidity is present, such as ponds and streams. The ideal time to cultivate this plant is late summer when the Giant reed produces purplish to silver-coloured flowering plumes.

In the first growing season, the stems produced are photosynthetic and unbranched. Starting from late June, the lower leaves of this plant begin drying, and complete drying accelerates between October and November.

Despite being an invasive plant, this weed is used as energy crops and biofuels for plants. It also reduces carbon dioxide emissions and is thus a valuable renewable energy alternative to fossil fuels. With so many benefits, it is a promising crop for other plants.

1. What is the lifespan of the corn plant?

The average lifespan of the corn plant is usually two to three years. But after a period of time, the plant’s lower leaves start drying and shedding as a normal process.

2. How to identify corn-like grasses?

3. How much water and sunlight does a corn plant need?

The corn plant doesn’t need excessive water to grow. So there is no particular amount of water recommended for it. Ideally, you should irrigate the plant regularly till the soil gets moist. Excessive moisture can damage the plant. Also, the plant requires low and indirect sunlight for growth. It cannot grow in direct sunlight as it can burn its leaves.

Corn-like plants are common to find in a garden or yard near you. Also, some of these plants can be extremely useful for the growth of surrounding plants and other purposes, which we have mentioned in this article. Through this guide, we hope you will be able to differentiate between look-alike plants and corn stalks. So choose wisely while opting for any indoor or outdoor plant to grow in your place.

If you have any queries related to this topic or gardening, share them with us in the comments. Keep checking our related blogs for more gardening tips and guides.

A rotating team of writers and editors dedicated to providing reliable information for the readers of American Promise. We’re all passionate about cannabis and actively engaged in this “budding” industry.